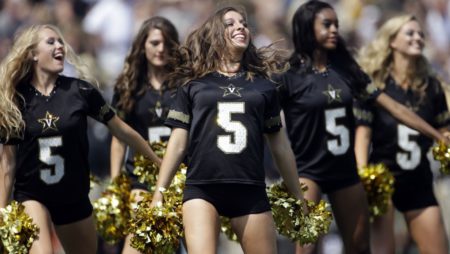 Can Vanderbilt get out of the SEC basement?

Clark Lea knew this job was going to be tough. He was defensive coordinator for Notre Dame, part of a very successful program which had produced very successful seasons under his watch. He left that great situation at Notre Dame because he wanted to be a head coach, and because he embraced the challenge of coaching Vanderbilt, one of the most snake-bitten and historically weak college football programs in the country. Lea wanted the higher degree of difficulty, and now he has it. Vanderbilt was bad in Year 1 of his tenure. He knew that was going to be the case. Now we begin to learn if Lea is truly up to the job, and if he can create improvements which will set the stage for the program’s future. This season is less about a specific win total, and more about significantly improving the quality of play for the program. Then Vanderbilt can honestly expect to make a bowl game in 2023 and beyond. Let’s look at this year’s roster.

Offensive tackle Tyler Steen transferred to Alabama. He was Vanderbilt’s best offensive lineman from the 2021 roster. It’s bad enough to lose a player at an important position, but even worse to lose someone who is widely regarded as a well-above-average performer. Given that Vanderbilt is in a complete rebuilding mode under a second-year coach, the attempt to replace Steen – not just his production but his dependability and his leadership in the locker room – will be very difficult.

On the plus side, Ja’Dais Richard, a safety who had previously committed to TCU but then switched to the Commodores, will provide help in the secondary. Jayden McGowen is a receiver who will give the offense a chance to evolve from its meager 2021 level of performance.

Vanderbilt Will Be Successful If…

The passing game becomes something opposing defenses have to take seriously. Vanderbilt will not have elite offensive linemen, and it won’t be supremely physical. Other teams in the SEC will have tougher, faster players than Vanderbilt. The Commodores are not going to physically overpower their opponents. This means they have to be able to throw the ball well in order to have a realistic chance of success. This offense has to find a way to hit quick-strike plays which gain over 30 yards and can move the ball in big chunks. This is how Vanderbilt can go from being the doormat of the SEC to a real contender for a bowl game which will play its opponents on even terms.

Vanderbilt Will Disappoint If…

The offensive line falls apart. Losing Tyler Steen is a huge setback for the development of this roster. The margins are so small for a team which is already going to be a betting underdog in the vast majority of the games it plays. The Commodores need to find a way to avoid regressing on offense. They might not improve, but they can at least avoid a noticeable drop-off in their level of play.

The One Best Vanderbilt Commodores Bet Is…

Vanderbilt might win outright, but a touchdown is too many points for a road game against a Hawaii team which will be very motivated.

Pick: Vanderbilt to lose vs the spread against Hawaii in Week 1