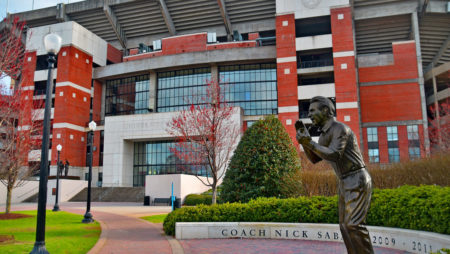 The Alabama Crimson Tide frankly weren’t very strong last season. Their offense was uncharacteristically feeble against LSU and Auburn. Remember that Alabama was down 10-3 to Auburn heading into the final minute of that game.

If Alabama had not scored a tying touchdown in the final minute, quarterback Bryce Young would not have won the Heisman Trophy. Alabama probably would not have made the College Football Playoff and the national championship game. In a very real sense, Alabama overachieved by making the national title game.

It was not a typical Nick Saban team. It didn’t dominate the way Saban’s best teams do. Now, the Tide will try to reclaim that dominance in 2022 and impose themselves on the rest of the SEC.

Receiver Jameson Williams, whose injury in the national championship game against Georgia was viewed by many as the biggest, most important moment from that contest won by Georgia, is now in the NFL.

He joins a typically deep NFL draft class in the pros, but at Alabama, Nick Saban always has a large army of players who are hungry and ready for their turn before they go to the NFL. Alabama does not have great difficulties replacing one NFL draft class with another.

One interesting change is that linebacker Shane Lee, a veteran of the program, transferred out to USC. Because of the depth Nick Saban stockpiles on his roster, it probably won’t hurt Alabama, but Lee’s leadership in the locker room could be missed more than most people think.

Alabama Will Be Successful If…

The offensive line regains its swagger. Alabama simply didn’t have a very good offensive line last year. Auburn dominated that line and nearly pulled an upset against the Tide.

LSU controlled that offensive line. It was a far cry from the 2020 offensive line, which was one of the best in school history, a group which enabled Bama to average over 48 points per game en route to the national title.

The 2022 group should be a lot better than 2021, if only because of more experience and a lot of lessons learned last year. If this unit does what is expected, Alabama will be extremely tough to beat.

Alabama Will Disappoint If…

The secondary has some stumbles. Alabama can’t give up downfield pass plays. This is what caused the loss to Texas A&M, and it’s often the weakness which leads to an Alabama loss. The secondary has to be able to shut down the big play. If it can’t, the margins for error shrink considerably for Saban.

The One Best Alabama Crimson Tide Bet Is…

Alabama won the SEC last year when it frankly didn’t seem to be the best team based on how it played. Most experts felt that Georgia was the best team, and the Bulldogs were 6.5-point favorite over Alabama in the SEC Championship Game.

Alabama just happened to play its very best game of the whole season against Georgia to win the SEC title, but for most of the year, Georgia played better ball. Now Alabama has a much more experienced roster. Georgia lost a lot of players to the NFL draft. Everything is set up well for Alabama to win another SEC title.